Sewing its way to success with modern garment factory

Kitui Governor Charity Ngilu launched the Kitui County Textile Centre (KICOTEC), which is the first ever garment factory by a County government in Kenya.

The county government envisages the factory will reduce the cost of garments especially uniforms and ensure that students stay in school and parents retain money to put to other needs.

According to Governor Charity Ngilu, an average of 486,000 students in both primary and secondary schools in the county will save over sh 2billion in a year translating to sh. 2.43 billion annually. A whopping 90% of the county’s expenditure on uniform goes to neighboring Thika, Nairobi and Kiambu counties.

The county is targeting income from local and national productions that will play a key role in boosting her economy. The gains from KICOTEC will support other services of the County like provision of clean water, affordable healthcare and education.

The KICOTEC’s establishment will promote buying of localproducts and essentially support local businesses to grow especially the Small and Medium Enterprises (SMEs), which account a high percentage of the county’s income.

Governor Ngilu’s move aims at ensuring the county’s economy is improved by stimulating use of locally produced goods.

President Uhuru Kenyatta’s directive that uniforms for government officers be manufactured at the county textile centre is viewed as an approval for Governor Charity Ngilu’s new garment factory.

Mr. Kenyatta directed that the uniforms be made at the factory in line with his fourth pillar of the Big Four agenda – manufacturing.

The declaration by the President will also boost the county as it will significantly raise the service industry in Kitui. 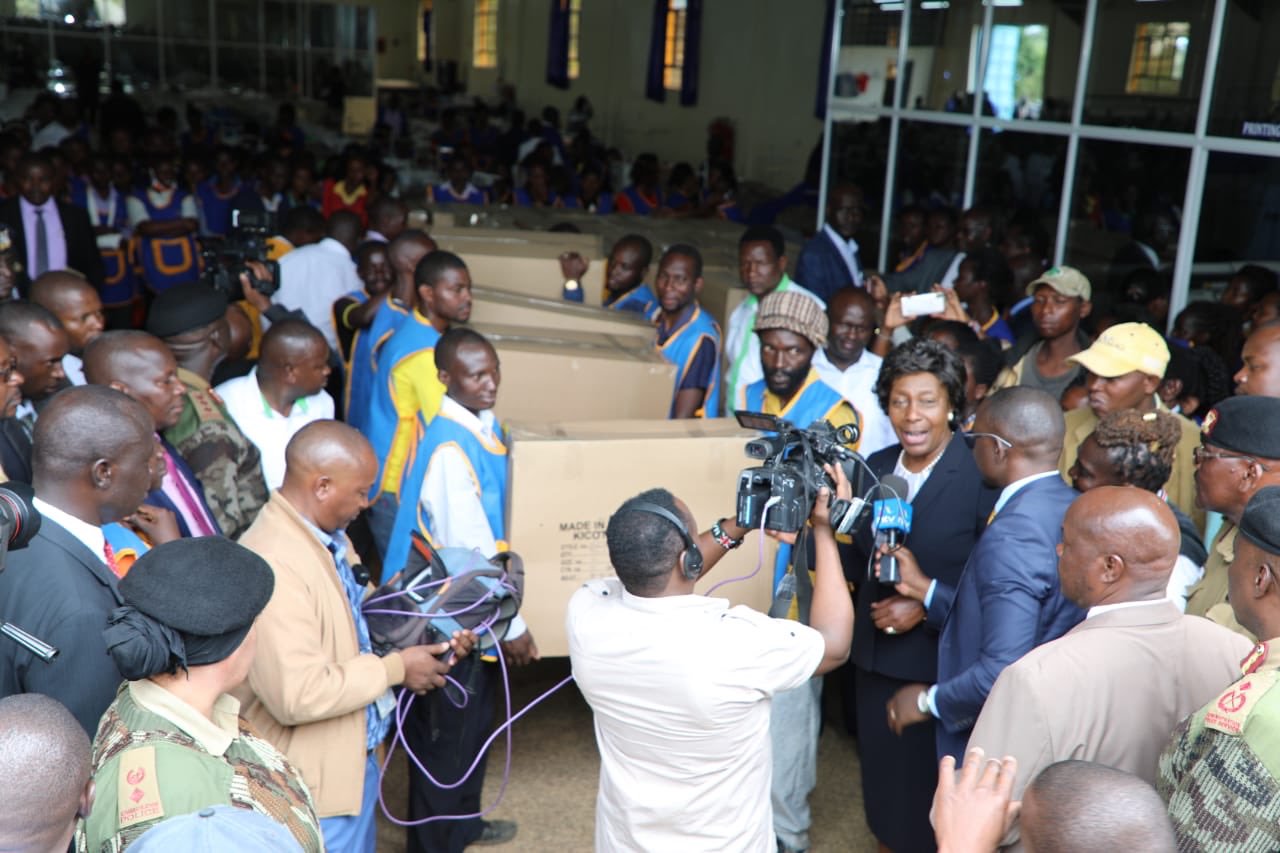 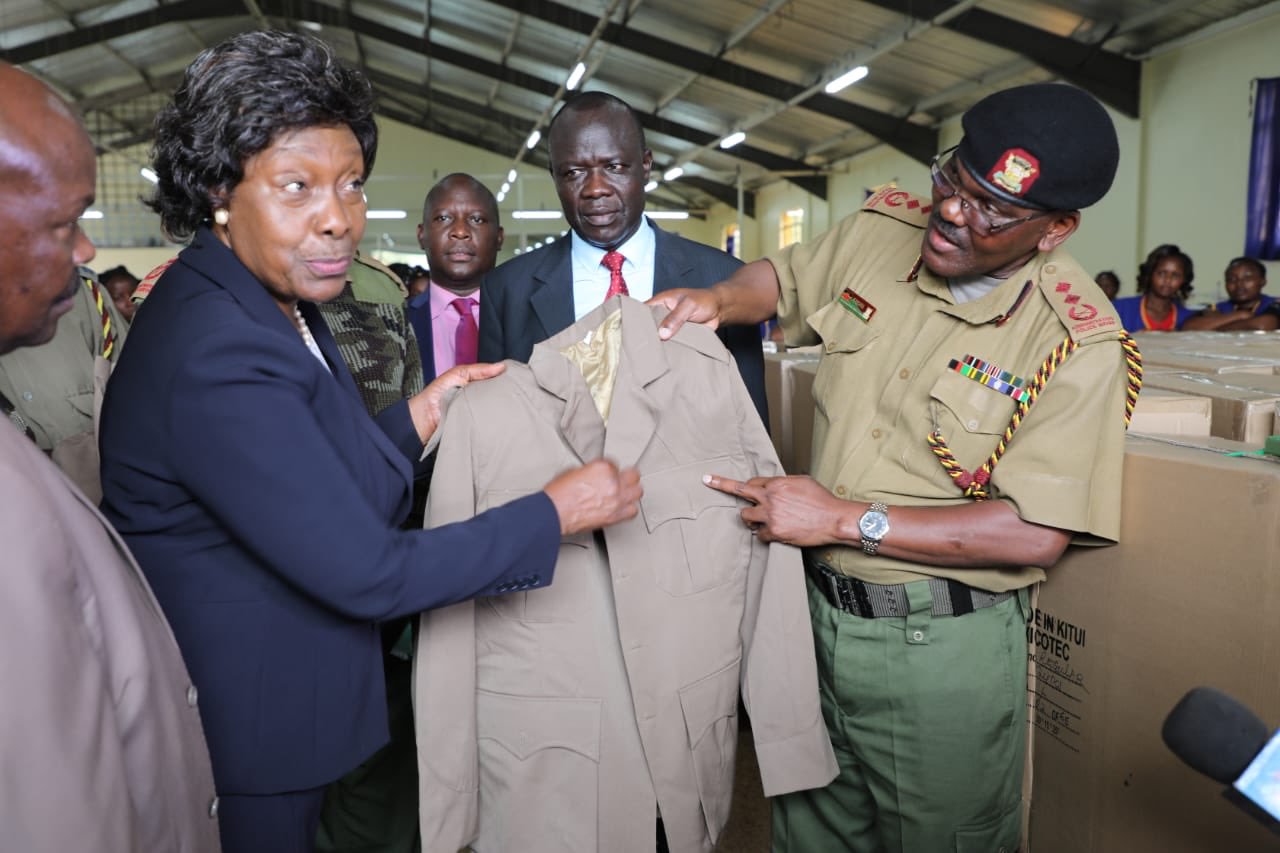 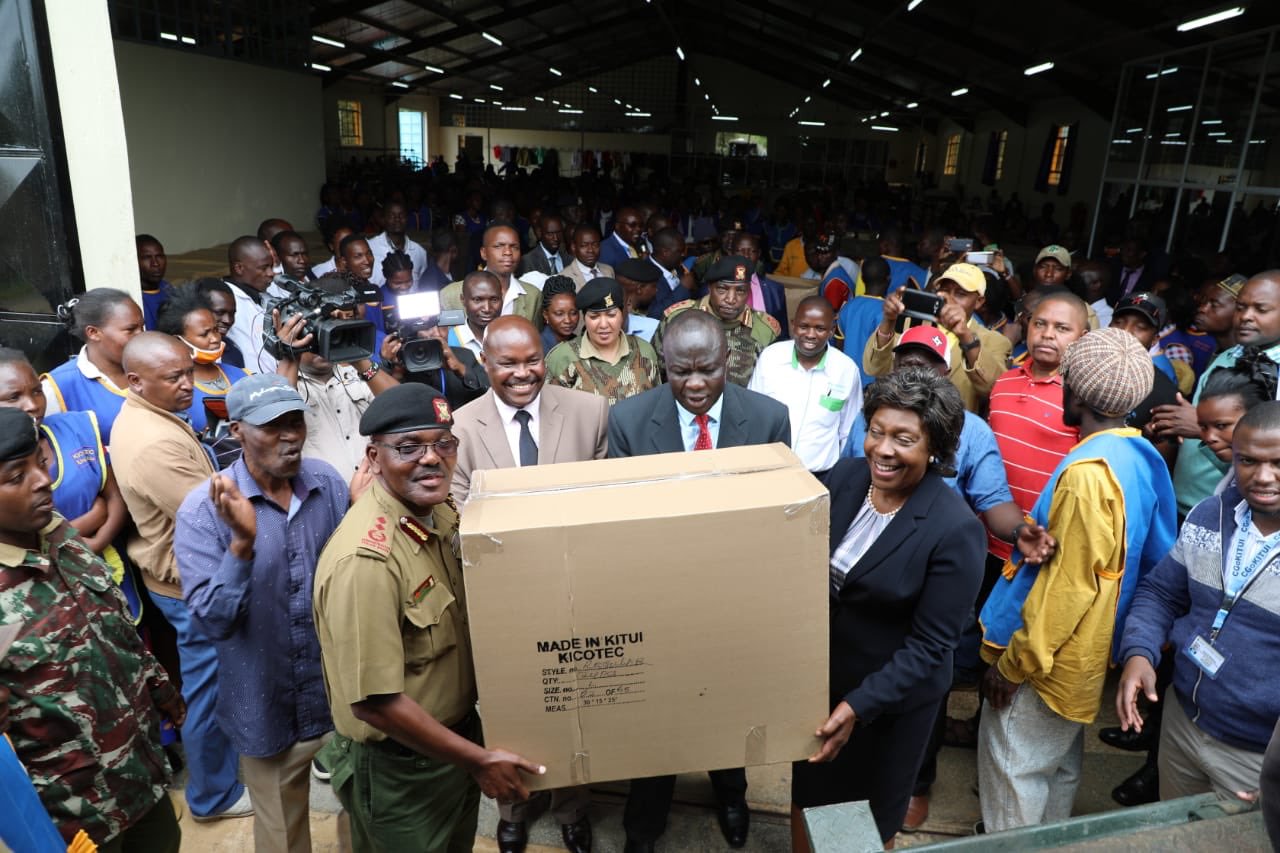 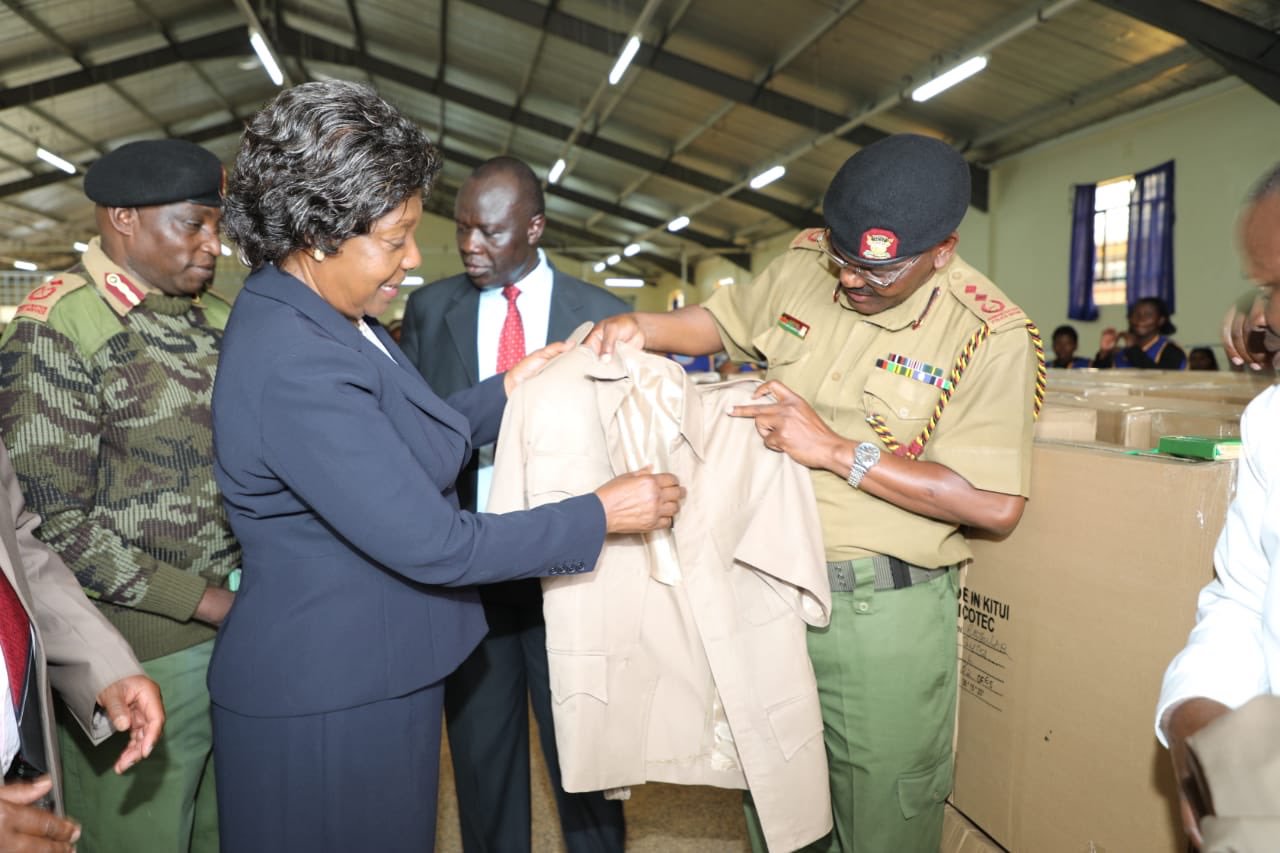 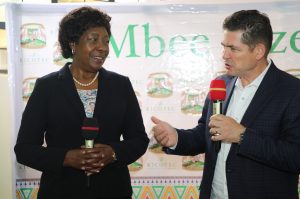 merican Ambassador to Kenya Kyle McCarter today visited Kitui Textile Centre – the county modern garment manufacturing plant in a trip set to expand the county products’ foreign market.
In his address to the Members of the Fourth Estate, Ambassador McCarter acclaimed the project as a key development that will significantly promote self-reliance among youths and women in the county.
He commended the County Government for initiating the project saying the country’s future was depended on empowering the youths.
“I thank you Governor for what you’ve done. The future of this country is in these young people” he said.
The Ambassador said KICOTEC demonstrated the county’s ability to grow themselves adding that the project is a milestone for Kitui.
“You do not need us to make it. You’ve clearly demonstrated that you can “. He praised the project.
Prior to his Nairobi assignment, Ambassador McCarter was a manufacturing entrepreneur in Lebanon, Illinois and has vast interests in business.
Noting the 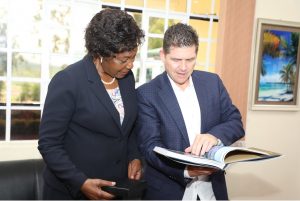 need to create jobs for youths and women in the country, McCarter said the establishment of KICOTEC was a noble idea that other counties should match.
“This project illustrates that Kenya shouldn’t only be a beneficiary of foreign aids but a benefactor in the industry”. He said.
On her part, Governor Charity Ngilu noted that trade, investment, partnership and market ties with the US will take centre stage during her approaching Dallas visit that will explore the State’s apparel market.
State House has been pushing for an increase in Kenya’s export volumes under an agreement that grants duty-free access to US market for products exported by beneficiary sub-Saharan countries.

PLANT EMPLOYS 300 YOUTHS. It is a ‘representation of an administration trained on improving lives’

In Summary
•All chiefs’ uniforms will be made by the Kitui-based Kicotec.

•Textile factory described as an embodiment of a county government keen to improve its people’s livelihood. 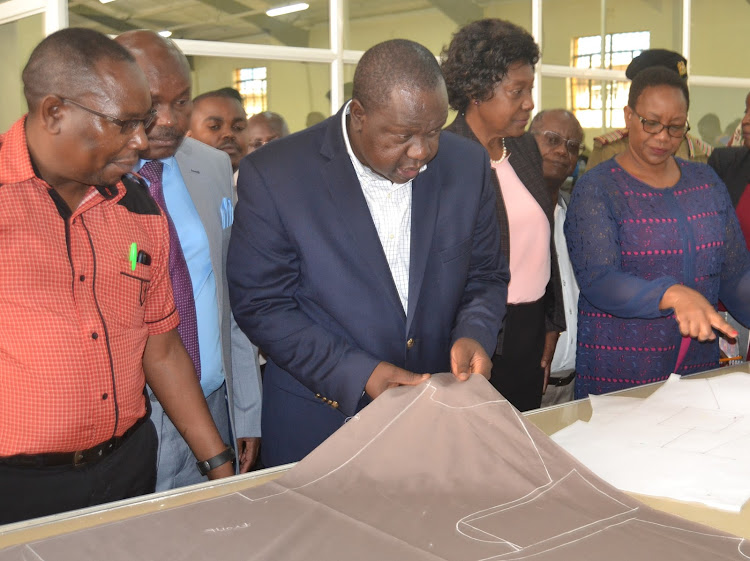 The Kitui County Texture Centre has been promised business by the national government.

“As a national government, we will give a lot of business to Kitui county,” Interior CS Fred Matiang’i said during a tour of the centre yesterday.

Matiang’i, who was accompanied by his Health counterpart Sicily Kariuki, said the textile factory was an embodiment of a county government keen to improve its people’s livelihood.

“Frankly what I have seen here today is the best possible example of a committed government,” he said.

The CSs were taken on a tour of the factory by Governor Charity Ngilu and Eastern regional commissioner Isaiah Nakoru.

The visit was a follow-up on a presentation and request made by Ngilu when President Uhuru Kenyatta visited Ukambani recently to launch the Huduma Namba at Masii in Machakos.

President Kenyatta is said to have agreed to award Kicotec the tender to make uniforms for all chiefs.

Matiang’i said the national government was ready to support the factory which employs 300 youths. It was established last year.

The Interior CS commended Ngilu for her development record of improving the economic welfare of the people of Kitui. 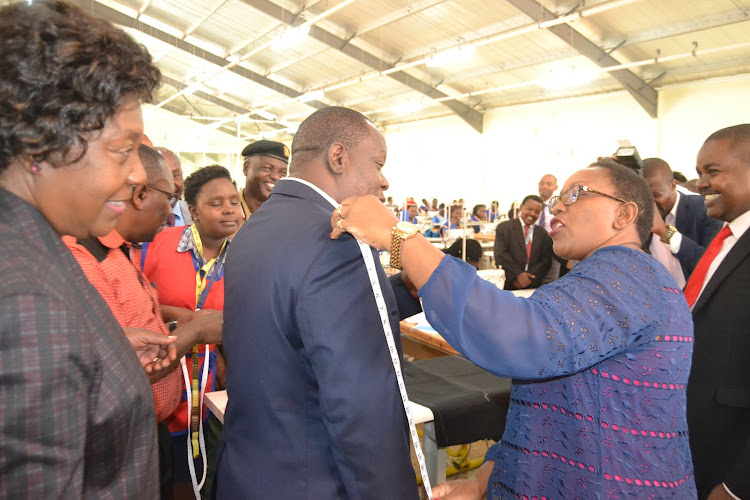 Matiang’i said that Kitui should be the destination for other counties to benchmark and regretted that it was imprudent to import goods that could be made in Kenya.

“There is no point of importing things we can make here. And there is no reason why we should be unwise by supporting other economies instead of our own.”

The national government will also support Kitui’s initiatives on honey and Ndengu value addition, he said.

On the Huduma Namba registration, the CS said the exercise was progressing well across the country as, by Tuesday, 15.6 million people had registered. He was optimistic that by the end of the week the tally would be 20 million.

Matiang’i was disappointed that charcoal burning and sand harvesting had not stopped in the county a ban by Governor Ngilu.  He ordered the arrest of violators as the protection of the environment cannot be compromised.

“I want to commend the governor for having a country-specific delivery of UHC in whose launch I was privileged to represent the President last year,” she said.

She said that for the UHC to succeed, individual Kenyans should take personal responsibility. “While the governments at the county and national level increase investment, healthcare starts with an individual. Prevention is better than cure.”

Kariuki was also taken on a tour of Kitui Level 4 Hospital by Ngilu. She inspected the renal unit and the CT scan facilities.